‘The Snow Leopard’ The New King of The Jungle?

At the tender age of 17 in a small city in Estonia, Marie Ruumet was packing a small bag of essential items, a few clothes, hand wraps, boxing gloves and some training shorts getting ready to set off to the other side of the world to pursue her dream of becoming a professional fighter, she remembers,

“I started training at 15, I started because I just wanted to take up a sport but everything I tried just didn’t really suit me.

One of my classmates started training Muay Thai and I saw him start training at a camp in Thailand and just thought it looked really cool and so then I started training myself and immediately fell in love with it, which has stuck ever since.”

Having suffered from bullying when she was younger, Marie could feel her self confidence growing with each day of training both Muay Thai and Boxing and soon found herself competing in local events. After winning her first few amateur fights one of her former bullies just so happened to be in the crowd watching, Marie recalls

“After I won one of my fights, one of the girls who used to bully me came up to me and shook my hand and said ‘wow I never thought that you had that in you!’ I had never felt anything like that before, It was one of the first times I had ever felt truly accomplished and I knew this was just the beginning.”

After racking up a total of 6 amateur fights in Estonia, Marie knew in order to properly pursue her passion she would have to travel to the motherland of Muay Thai and take herself to Thailand to train and fight.

“At first I only thought I was going to Phuket for 2 months and during that time I ended up having 4 fights and I made some money during those fights, around 7000 or 5000 baht a fight so I made around 24,000 (about 800 USD) and that’s when it hit me, I could actually make a living just by fighting.

So I went back home for a month and my parents saw that I had come back with some money at least but they also saw that I no longer had any passion left in Estonia and I had left my heart over in Thailand. I had been saving money for 2 years so that I could buy my own car but I ended up taking all those savings to go back to Thailand and pursue my dream of becoming a fighter. I had to convince my parents that I was doing the right thing and that I didn’t need to continue further education. I’m very lucky to have such understanding parents. I guess they just believed in me since day one.

3 years later she racked up an impressive record of 46 fights with 37 wins and just 9 losses and so finally got the much anticipated call to make her debut at one of the largest fight promotions in the world, One Championship. She would be facing a well known Japanese fighter ‘Little Tiger’ a K-1 veteran and former WBC champion but Marie felt little fear as she entered the ONE FC ring for the very first time,

“I always look at my opponent in the eye when I’m in the ring, I like to focus on my opponent. I saw Mike Tyson doing it while I was growing up and he was my first ever idol in the sport. All the toughest  people I’ve fought always look right back at you but Little Tiger wouldn’t even look at me at all, like not even at my legs, let alone in the eyes. So that gave me a lot of confidence before it even started, I could feel she wasn’t confident in facing me.

After 3 rounds and 9 minutes of one sided action Marie had executed her game plan perfectly taking the unanimous decision victory while also showing the world that a new jungle cat is here to take over.

“It felt totally unreal having my hand raised in there and finally making it to the big stage. It truly is the best feeling ever.

I’m really happy with this fight but I also know i still have a lot to improve. I’m looking forward to my next fight as I really believe I’m going to bring even better version of myself. 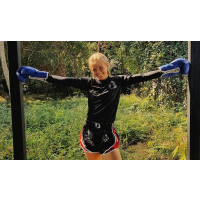