The rise of the ‘Smiling Assassin’

A remarkable tale of relentless hard work, northern Thailand Muay Thai champion and current One Championship MMA fighter, Pongsiri Mitsatit grew up in the little known hill tribe sect of Thailand. He began his martial arts journey after suffering repeated bullying from a neighbourhood kid. Fed up of the continuous harassment Pongisiri decided to pick up his gloves for the first time and begin his Muay Thai journey.

It soon became apparent Pongsiri had some talent lurking inside and his trainers sent him out to fight to earn his keep at their gym. However, what started as a means to protect himself from bullies soon became a gruelling lifestyle with his trainers often forcing the young boy to fight twice in a single night, travelling from one stadium immediately to the next fighting back to back.

At 17 years old and with a few fights under his belt Pongsiri was fighting in a local stadium in Chiang Mai when he was noticed by a Muay Thai trainer, Kru Ping. Ping upon watching him fight, noticed the boy had exceptional heart inside the ring and decided to approach Pongsiri after the fight, where he heard of his mistreatment at his current gym and decided to offer him to come and train at the gym he was working for, Team Quest Thailand which Pongsiri graciously accepted.

Pongsiri quickly won the hearts of all the trainers at Team Quest Thailand, even though he barely said a word to anyone he was always extremely polite and respectful yet trained fiercely with unyielding dedication. His shy and somewhat timid persona however, was something not mirrored once he stepped in the ring, as soon as the bell rang he quickly transformed into a ruthless unstoppable force confidently putting away the vast majority of his opponents all the while carrying a notorious smile on his face which soon landed him the nickname ‘The Smiling Assassin’. It wasn’t long before he was capturing all the championship belts from local stadiums and ultimately went on to become champion of the prestigious northern Thailand belt in 2015.

Soon Pongsiri’s attention became directed towards MMA, after all he was training at Team Quest Thailand, a gym famous for Muay Thai, BJJ and wrestling. After racking up a 72-17 record in Muay Thai he decided it was time to strap on the small gloves and see how his skills faired inside the octagon. With MMA in Thailand being on extremely controversial grounds at the time due to many Thai’s worrying it would overshadow Muay Thai (the countries national sport), Pongsiri was eventually able to land himself a fight on a tiny promotion in Chiang Mai making quick work of his opponent knocking him out in round 1. He was then picked up by Thailands biggest MMA promotion at the time, Full Metal Dojo, where he won all 4 his fights before finally being scouted by the booming promotion One Championship in 2016.

With very few Thai MMA fighters Pongsiri was determined to make a name for himself and exactly that he did, finishing his first 3 opponents in spectacular fashion. With his new found spotlight also came paychecks like he had never seen before and while many young adults would jump at the chance to finally be able to spend money on treating themselves Pongsiri immediately sent most of his hard earned cash back to support his poorer parents, even buying his father a new car.  When he is not training or fighting Pongsiri can be found spending his free time volunteering with rescue services and was also one of the first group of responders to jump into action to help rescue the 12 boys trapped in a flooded cave for over 2 weeks. Pongsiri’s story is truly inspiring as it shines light on how we can all reach our goals if we also pursue them with non stop dedication, a good attitude and a bad ass smile to go along side it.

Pongsiri will be stepping back into the One Championship arena on the 31st of July representing, Tiger Muay Thai be sure to tune in to catch the young stud in action. 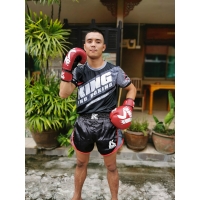