With Muay Thais popularity peaking more than ever around the world, more and more gyms are popping up globally. For decades in Thailand, Muay Thai has been branded with the reputation of a ‘poor mans’ sport, those who trained were often from rural villages and poor families, training and fighting in Muay Thai as a crutch to push themselves out of poverty. It’s quite common for parents to send their kids off to fight from the tender age of just 7 or 8 years old and while this is controversial in its own right, the young fighter can earn 500 baht a fight (about $16 USD) this quickly becomes a way to support their entire family as the boy or girl can be sent to fight 2 to 3 times per week.

It’s in these rural village gyms however that often the most savage, hard-bodied champions are hand sculpted through brutal conditions and rigorous training of up to 6 hours a day, 6 days a week. The gym itself will often be very small, maybe 3 to 4 heavily used kicking bags, a slap-up makeshift ring put together with some old ropes and a thinly matted canvas over concrete. Make no mistake however these squalor gyms are where they churn out true elite level fighters. In areas such as Issan in eastern Thailand, there is such little infrastructure and job opportunities Muay Thai is one of the only ways to fight yourself out of poverty.

Thanks to the fairly recent boom in mixed martial arts, interest in training and learning Thai boxing has risen dramatically. This has resulted in many new modern, trendy and well equipped gyms popping up. People now have the choice to train in luxurious air conditioned rooms with sparkling clean facilities, which is ideal for those who want to take up the sport as a hobby or a more exciting way to keep fit rather then hitting the treadmill a few times per week but what about those who would like to pursue a career in fighting?

To make it to the top in combat sports you have to get used to the idea of getting comfortable being UNcomfortable, while training in air conditioned rooms with spongey soft mats and state of the art gym equipment sounds appealing, it’s the gritty daily grind of running roadside miles upon miles under the sun, the wear and tear of your soles as they grate against the rock hard gyms matts and battling through a hard fought round of sparring with guys who’ve never even learnt the meaning of the word luxury.

At the end of the day both types of gyms have their benefits, pros and cons, what it really comes down to is what YOU are looking to get out of your training but for those looking to get the authentic and ‘true’ Muay Thai experience, go and test yourself in one of the old school long standing gyms. 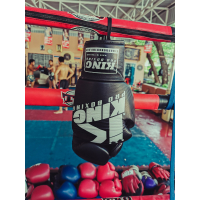 Apparently you are visiting our website from outside the EU.
We are forwarding you to our international partner.